Beer is a Drink in Cook, Serve, Delicious! 2!!. Craft Beer is a variant of beer that functions identically but is locked and rewards more money.

Beer is one of the most researched beverages on the planet, and is most commonly studied by individuals consuming several beers in a row.

Dating back as far as 9,500 BC, archeologists believe that beer was key to the creation of civilization itself, as those who drink it tend to be more jovial, outgoing, and if consumed in groups, less annoying. However, the aforementioned testing has shown that there is a tipping point to these positive effects when too many beers are consumed, at which point people may stop making sense, thinking rationally, or living.

A Beer refill ticket is created every 4th time it is sold with an entree. 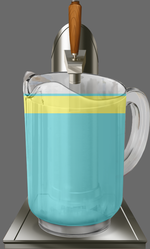 To fulfil a perfect order you must fill the pitcher to the perfect zone. When the beer level reaches the perfect zone, the rate at which it pours slows. To the right is an illustration showing where the perfect zone stretches, shown in yellow, and where you will result in an average order, shown in blue.