Chopped Brisket Sandwich is an Entree in Cook, Serve, Delicious! 2!!.

Before the invention of chopped brisket sandwiches, whole brisket sandwiches were sold by a small sandwich shop in Odessa, Texas. Although whole brisket sandwiches were a success, the enormous size of the meat resulted in approximately 90% of customers leaving with unhinged jaws. While the owner of the sandwich shop originally cared little for this problem, he later became concerned that the screaming was scaring away new customers. A sandwich-related pragmatist at heart, the owner ultimately decided to chop the brisket up before including it in the sandwich. The move was a huge success, and as a result screaming was down 85%, with the remaining screaming caused by unrelated issues. 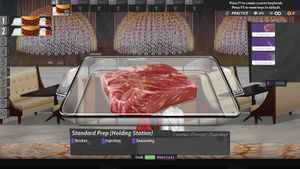