Pancakes is an Entree in Cook, Serve, Delicious! 2!!.

Breakfast pancakes were first invented in Ancient Greece, though they were called "Tagenites" and were made with wheat flour, olive oil, honey, and curdled milk. Despite their incredibly simple composition, many experts now believe pancakes to be among the greatest of the Ancient Greek inventions alongside philosophy, geometry, and alarm clocks.

Though modern pancakes are often served with syrup, this practice was not widespread until The Great Syrup Flood of January 14, 1919 - an event which has gone by almost completely unheard of due to it being upstaged by the larger Great Molasses Flood a day later - during which a syrup manufacturer's entire plant erupted into a volcano of syrup, which then slowly traveled down the road to a breakfast diner at the bottom of the hill. First responders described the scene as tragic yet surprisingly delicious.

Today, syrup is drizzled onto pancakes as a solemn memorial of the lives that were eventually lost by those who fell into the syrup while trying to retrieve their food.

This Food has two cooking stages to go through before serving.
Stage 1: You need to cook 3 Pancakes. 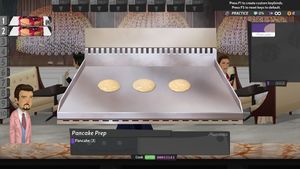