Yaki Tomorokoshi is an entree in Cook Serve Delicious! 2!!.

Yaki Tomorokoshi is a Japanese dish of grilled corn on the cob that is coated with a glaze made of soy sauce, mirin, sugar, and other seasonings. Though little is known about the exact origins of this dish, it is widely believed that either a Japanese person or a person residing in Japan had acces to cobs of corn and wanted to spice up the dish before eating it themselves or serving it to others.

This person that presumably grilled the cobs of corn, although some speculate that this might have been a failed att empt to invent popcorn. The person then seemingly either ate or did not eat the corn before deciding to concoct a glaze for the cob, so they doubtless mixed together soy sauce, mirin, sugar, and other seasonings either immediatly or after a period of trial and error.

Some say this food inspired the phrase "cobbled together", which may or may not be true.

You may use a Holding Staton to prep a portion of this food in advance.


Each Holding Station can serve 4 customers. 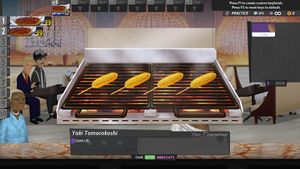 If you don't have a portion ready when the customer arrive, you will need to cook a Corn for the customer.

Before serving the dish, you need to go through one last step.